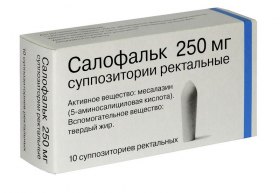 1. NAME OF THE MEDICINAL PRODUCT

One suppository contains mesalazine as the medically active ingredient.

Treatment of acute episodes of ulcerative colitis that is limited to the rectum.

4.2 Posology and method of administration

Adults and elderly:
One Salofalk  suppository three times daily (equivalent to 1500 mg mesalazine daily) inserted into the rectum, according to the individual clinical requirement.

As soon as remission has occurred, the dose in prevention of recurrence
should be reduced to one suppository with 250 mg mesalazine three times daily (e.g. Salofalk 250mg Suppositories).

There is little experience  and only limited documentation for an effect in children.

Method of administration:
When used three times daily, Salofalk  Suppositories should be inserted into the rectum in the morning, at midday and at bedtime.

Treatment with Salofalk Suppositories must be administered regularly and consistently, because only in this way can healing be successfully achieved.

The duration of use is determined by the physician.

Salofalk 500mg Suppositories are contraindicated in patients with:

– hypersensitivity to the active substance, salicylates or to any of the excipients listed in section 6.1

4.4 Special warnings and precautions for use

Blood tests (differential blood count; liver function parameters like ALT or AST; serum creatinine) and urinary status (dip sticks) should be determined prior to and during treatment, at the discretion of the treating physician. As a guideline, follow-up tests are recommended 14 days after commencement of treatment, then a further two to three tests at intervals of 4 weeks.

Caution is recommended in patients with impaired hepatic function.

Salofalk  Suppositories are not recommended in patients with impaired renal function. Mesalazine-induced renal toxicity should be considered, if renal function deteriorates during treatment.

Patients with pulmonary disease, in particular asthma, should be very carefully monitored during a course of treatment with Salofalk Suppositories.

Patients with a history of adverse drug reactions to preparations containing sulphasalazine should be kept under close medical surveillance on commencement of a course of treatment with Salofalk 500mg Suppositories. Should Salofalk  Suppositories cause acute intolerance reactions such as abdominal cramps, acute abdominal pain, fever, severe headache and rash, therapy should be discontinued immediately.

4.5 Interaction with other medicinal products and other forms of interaction

Specific interaction studies have not been performed.

There is weak evidence that mesalazine might decrease the anticoagulant effect of warfarin.

Pregnancy
There are no adequate data on the use of Salofalk Suppositories in pregnant women. However, data on a limited number of exposed pregnancies indicate no adverse effect of mesalazine on the pregnancy or on the health of the foetus/newborn child. To date no other relevant epidemiologic data are available. In one single case after long-term use of a high dose of mesalazine (2-4 g, orally) during pregnancy, renal failure in a neonate was reported.

Animal studies on oral mesalazine do not indicate direct or indirect harmful effects with respect to pregnancy, embryonic/foetal development, parturition or postnatal development.

Salofalk 500mg Suppositories should only be used during pregnancy if the potential benefit outweighs the possible risk.

Breast-feeding
N-acetyl-5-aminosalicylic acid and to a lesser degree mesalazine are excreted in breast milk. Only limited experience during lactation in women is available to date. Hypersensitivity reactions such as diarrhoea in the infant cannot be excluded. Therefore, Salofalk Suppositories should only be used during breast-feeding, if the potential benefit outweighs the possible risk. If the infant develops diarrhoea, the breast-feeding should be discontinued.

4.7 Effects on ability to drive and use machines

Salofalk 500mg Suppositories have no or negligible influence on the ability to drive and use machines.

The following undesirable effects have been observed after administration of mesalazine:

Photosensitivity
More severe reactions are reported in patients with pre-existing skin conditions such as atopic dermatitis and atopic eczema.

There are rare data on overdosage (e.g. intended suicide with high oral doses of mesalazine), which do not indicate renal or hepatic toxicity. There is no specific antidote  and treatment is symptomatic and supportive.

Mechanism of action
The mechanism of the anti-inflammatory action is unknown. The results of in vitro studies indicate that inhibition of lipoxygenase may play a role.
Effects on prostaglandin concentrations in the intestinal mucosa have also been demonstrated. Mesalazine (5-Aminosalicylic acid / 5-ASA) may also function as a radical scavenger of reactive oxygen compounds.

Biotransformation:
Mesalazine is metabolised both pre-systemically by the intestinal mucosa and in the liver to the pharmacologically inactive N-acetyl-5-aminosalicylic acid (N-Ac-5-ASA). The acetylation seems to be independent of the acetylator phenotype of the patient. Some acetylation also occurs through the action of colonic bacteria. Protein binding of mesalazine and N-Ac-5-ASA is 43% and 78%, respectively.

Elimination:
Mesalazine and its metabolite N-Ac-5-ASA are eliminated via the faeces (major part), renally (varies between 20 and 50%, dependent on kind of application, pharmaceutical preparation and route of mesalazine release, respectively), and biliary (minor part). Renal excretion predominantly occurs as N-Ac-5-ASA. About 1% of total orally administered mesalazine dose is excreted into the breast milk mainly as N-Ac-5-ASA.

Distribution:
Scintigraphic studies with technetium-labelled Salofalk 500mg Suppositories showed peak spread of the suppository that had melted due to body temperature after 2 – 3 hours. The spread was limited primarily to the rectum and rectosigmoid junction. Salofalk Suppositories are thus particularly suitable for treating proctitis (ulcerative colitis of the rectum).

Elimination:
After a single rectal dose of 500 mg mesalazine as Salofalk Suppositories, approx. 11% (within 72 hours) was recovered in the urine, and after several weeks of long-term treatment with 500 mg mesalazine three times daily as Salofalk Suppositories approx. 13% of the 5-ASA dose administered was recovered in the urine. Approximately 10 % of a single administered dose was eliminated via the bile.

Preclinical data reveal no special hazard for humans based on conventional studies of safety pharmacology, genotoxicity, carcinogenicity (rat) or toxicity to reproduction.

Kidney toxicity (renal papillary necrosis and epithelial damage in the proximal convoluted tubule or the whole nephron) has been seen in repeat-dose toxicity studies with high oral doses of mesalazine. The clinical relevance of this finding is unknown.

Store in the original container in order to protect contents from light.
Do not store above 30C.

6.5  Nature and contents of container

6.6 Special precautions for disposal and other handling