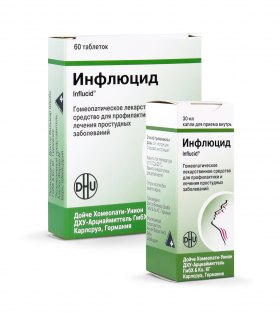 According to statistics, acute respiratory viral infections and flu are the most common infections that humanity suffers. Given the huge and growing diversity of viruses that cause these diseases, a drug is needed that will help to successfully cope with them. Influcid is the original German complex drug, traditionally used in the complex treatment of influenza and acute respiratory diseases. According to data from clinical studies Influcid tablets and drops have an antiviral effect not only on influenza viruses, but also on most viruses that cause ARVI, besides this drug has an immunomodulatory effect and a symptomatic effect.

Already at the onset of the disease, Influcid contributes to the rapid elimination of various manifestations of SARS and flu: headache, muscle pain, fever, rhinitis, pharyngitis.

Influcid is a powerful natural interferon inducer, and interferon is an important element of the first line of defense of the body.

Another advantage of Influcid is the ability to significantly reduce the manifestations of asthenia (weakness and weakness) after suffering diseases, which means that you can return to your normal lifestyle after an illness.