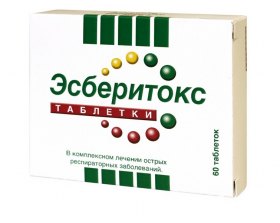 Esberitox is an original German drug.

Esberitox-reduces the symptoms of the disease.

Esberitox – in the complex treatment of acute respiratory diseases.*

Acute respiratory infections (ARI) are the most common pathology. The high incidence of ARI is associated with a lack of specific immunity, which leads to their rapid spread of infection.In preclinical studies of a complex herbal preparation based on Baptisia tinctoria, Echinaceae pallidae, Echinaceae purpureae, Thujae occidentalis (Esberitox) found a stimulating effect on various parts of the immune system in the treatment of diseases of the respiratory tract.

Esberitox contains an extract of the rhizomes of Baptisia dye, which acts on B-lymphocytes (a type of immune cells) and accelerates the formation of antibodies, important immune warriors, whose task is to prevent the proliferation of viruses and bacteria and neutralize the toxic substances released by these pathogens;
Dry extract of roots of Echinacea purpurea and roots of Echinacea pallida that stimulate phagocytosis (an active grasping and destruction of pathogens by special cells in the blood by phagocytes);

Extract of young shoots and leaves of thuja, which has an antiviral effect.

The clinical efficacy of the complex herbal preparation (Esberitox) in patients with acute respiratory diseases, including viral infection caused by influenza a virus, has been demonstrated in randomized, placebo-controlled studies.

Esberitox shows synergy with antibiotics, which allows to achieve a faster clinical effect.**

Esberitox should be taken at the first signs of the disease.

The use of the drug Esberitox is characterized by good tolerability.ESBERITOX is an original standardized German complex phytopreparation based on Baptisia tinctoria, Echinaceae pallidae, Echinaceae purpureae, Thujae occidentalis for children from 12 years and adults, in the complex treatment of acute respiratory diseases.

Registered in Germany since 1923, and in more than 20 other European countries.

* Advertising of the medicinal product. Before use, read the instructions and consult your doctor. There are contraindications and possible side effects. Not recommended for use during pregnancy and lactation and children under 12 years.
** “Efficacy of plant immunomodulators in diseases of the respiratory tract»
Maydannyk V. G., Demchinsky E. A., Troitskaya I. V. national medical University named after O. O. Bogomolets, Kiev, Ukraine.
*** ROOKS RB No. 10356/15 from 30.04.2015 in 30.04.2020
Manufactured By: Schaper & Brummer GmbH & Co. KG, Germany