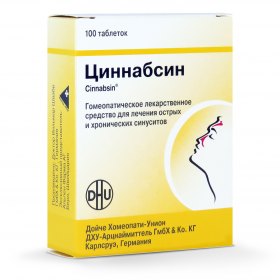 Cinnabsin is used in the treatment of acute and chronic inflammation of the sinuses (sinusitis). According to statistics, runny nose (infectious rhinitis) is the most common symptom of the common cold, and sinusitis is the most common complication of the common cold caused by an infectious agent. In 90-95% of cases of all acute respiratory viral infections, the maxillary sinuses (maxillary sinuses) are affected. To help cope with it and prevent the development of complications can German natural complex drug Cinnabsin *.

In Europe, Zinnabsin has been used for the treatment of rhinitis and antritis for over 50 years. Its composition is selected in such a way as to help the nose to cope with the disease.

The main feature of the drug Zinnabsin – versatility of action, due to the complex composition. According to large European clinical studies, Cinnabsin not only safely restores nasal breathing, relieves swelling of the nasal mucosa and paranasal sinuses, but also thins thick mucus, facilitates its discharge, normalizing the natural mechanism of nasal mucosa cleansing and the paranasal sinuses. Another important advantage of the drug Zinnabsin is the ability to increase the body’s own defenses, which speeds up recovery and prevents the transition of an acute process to a chronic one. Cinnabsin is approved for use by children from 6 years and adults.

Cinnabsin with its inherent versatility of action favorably differs from vasoconstrictor drops, which only restore nasal breathing, causing constriction of the blood vessels and disrupting the natural mechanism of nasal mucosa cleansing.

There is only one choice: sinusitis – Cinnabsin!